I’m rereading The Righteous Mind: Why Good People Are Divided by Politics and Religion

for a project I’m working on. As you know (I hope) the seeds for my Cognitive Theory of Politics are in there. One of them is Haidt’s discussion of WEIRD vs Holistic style of thought. Another is this quote:

Enlightenment thinkers were united in rejecting divine revelation as the source of moral knowledge, but they were divided as to whether morality transcended human nature—that is, it emerged from the very nature of rationality and could therefore be deduced by reasoning, as Plato believed — or whether morality was a part of human nature, like language or taste, which had to be studied by observation.6

The divide between “deduced by reason” and “studied by observation” has existed for 2,400 years (or more), according to Arthur Herman in The Cave and the Light: Plato Versus Aristotle, and the Struggle for the Soul of Western Civilization

Despite their differences, Plato and Aristotle agreed on many things.  They both stressed the importance of reason as our guide for understanding and shaping the world. Both believed that our physical world is shaped by certain eternal forms that are more real than matter. The difference was that Plato’s forms existed outside matter, whereas Aristotle’s forms were unrealizable without it. (p. 61)

The twentieth century’s greatest ideological conflicts do mark the violent unfolding of a Platonist versus Aristotelian view of what it means to be free and how reason and knowledge ultimately fit into our lives (p.539-540)

The Cognitive Theory also holds that a Principle of Moral Psychology that’s missing from Moral Foundations Theory is:

The missing principle and The Cognitive Theory help to explain what Moral Foundations Theory cannot explain in its current form:

1) WHY there are two main moral matrices rather than just one, and

2) WHY those matrices use the foundations as they do.

, which echoes Haidt’s description of how cultures progress from survival-based to egalitarian (graph, below, from Questions for a Resilient Future: Culture, Conscience, & Capitalism): 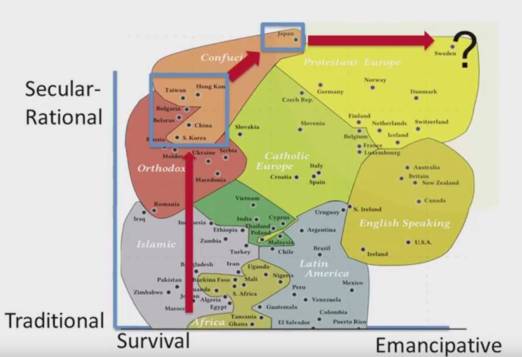 Adding cognitive style to Moral Foundations Theory opens the door to entire realms of inquiry heretofore untapped. The best analyses of the partisan divide I’ve ever seen came from studies by observation (Aristotelian empiricism); Something WEIRD-leaning academia seems to eschew. Examples include the book Dignity: Seeking Respect in Back Row America

by Chris Arnade, and the essay Revenge of the Forgotten Class by Alec MacGillis in ProPublica.

The Cognitive Theory of Politics is one of my Nine Challenges to Moral Foundations Theory.

Like Loading...
« The Social Cancer of the West? (by way of Cancer Talk #4: The Next Phase Begins)
Lee Jussim’s Twitter Thread Illustrates The Cognitive Theory of Politics »