It’s HOW we think, not WHAT we think, that divides us 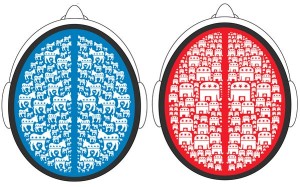 If it is true that the mind is like a small rider on the back of a huge elephant  – where the elephant represents instinct and intuition which motivates ninety-nine percent of human thought and action and the rider represents conscious reasoning which evolved to help us win arguments by acting as a press secretary on behalf of those gut feelings – then it makes little sense to define liberalism and conservatism in terms of what they say – i.e., the beliefs, principles, tenets, etc., they espouse via their reasoning – and it makes a lot of sense to define them in terms of how their intuitive minds process information to arrive at those beliefs.

Liberalism and conservatism are best understood as psychological profiles; cognitive processes; operating systems, if you will, like Windows and iOS, from which the outcomes of beliefs, ideologies, values, principles, ideas, tenets, policies follow.

Defining left and right in terms of outcomes rather than in terms of cognitive processes that lead to those outcomes puts the cart before the horse; it’s confusing and misleading, if not just plain wrong, and arguably increases rather than decreases partisan animosity because neither side truly grasps where the other is coming from.

Psychological profiles process the information they receive from the environments in which they are immersed, where the environment consists of the history,  traditions, institutions, customs, habits, beliefs, values, culture, etc. of local time and place.  If we could drop a fresh new conservative brain into the cultural environment of Britain then the outcome would be a British conservative.  But if we were to drop that exact same brain into American culture we’d get an American conservative. In both cases it’s the same set of psychological evolutionary adaptations – the same cognitive DNA – operating in different environments, processing the information it receives from that environment.

The same is true of the liberal profile.

Defining liberalism and conservatism in terms of what they think in different times and places can be confusing and misleading. They can value different things,  which can make them appear to he inconsistent, even hypocritical, and therefore difficult to understand.  We can draw incorrect conclusions about their nature, priorities, beliefs, etc.  But if we endeavor to understand them in terms of the psychological profile – the elephant; how they think – then they become much easier to understand, and their internal consistencies across the centuries become much easier to see, as well as do their actions today.

The Cognitive Theory of Politics does exactly that. It provides us with a brand new lens through which we can better understand ourselves, each other, where we came from, and where we may be going.  Human nature hasn’t really changed, only tactics.

Like Loading...
« Haidt is the Exception That Proves the Rule
The Bluer the County the Higher the Murder Rate »

One thought on “It’s HOW we think, not WHAT we think, that divides us”