Cover of The Cousins’ Wars

In the book The Cousins’ Wars

Kevin Phillips argues that the English Civil War, The American War for Independence, and the American Civil War were not independent conflicts but rather three battles in a single, long, overarching struggle between two opposing world views.

is merely the latest battle in that very same centuries-long war.

Phillips traces the two opposing outlooks of the Civil War to immigration patterns of specific tribes which brought with them to America the cultural heritage, world views, and ideological frameworks of their forebears.

One immigration pattern is that of the Anglo-Saxons who settled first in eastern England, some descendants of whom later settled in New England as shown in these maps from the book. 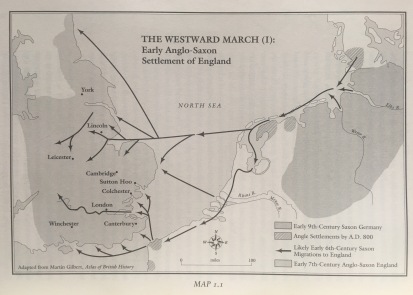 The second immigration pattern is that of the Normans of continental Europe who tended to settle in the American South.

For a rough general picture of the ideological framework of the Anglo Saxon Northerners  think Edmund Burke.

For a broad generalization of the intellectual heritage of the Norman Southerners think Rousseau, and recall the heavy French and Spanish influence of, say, New Orleans.

The American Civil War was fought between these two world views.

Anglo-Saxon England, in Massachusetts eyes, was a kind of pre-feudal elysium until it was conquered and yoked by the Normans.  Thomas Jefferson was also an ardent exponent of the Saxon example, but these views were less common in the plantation colonies.  By the time the last cousins’ war [the American Civil War] rolled around, the American Southern states had a contrary twist, as chapter 8 will discuss. Northerners were the Saxons, but Southerners were the cavilers, the knightly Norman stock that conquered them (p.28).

I suggest that those two world views are summarized by Arthur Herman in The Cave and the Light: Plato Versus Aristotle, and the Struggle for the Soul of Western Civilization

, by Jonathan Haidt in The Righteous Mind

, by Thomas Sowell in A Conflict of Visions

, and by me in my Cognitive Theory of Politics,

That the patterns of thinking described by those authors seem to repeat throughout human history is difficult to miss.  Of course, nothing is black and white, and there’s always some amount of intermixing of peoples, and the borders between them are blurred lines that often overlap.  Phillips is quite careful to make this very clear.  But as Phillips explains, “If you didn’t know the religious [tribal] map of the United States, you couldn’t understand the electoral map.”

Generally speaking, in the following two quotes from Herman I see in Plato’s outlook Sowell’s unconstrained vision, Haidt’s three-foundation moral matrix, and the Rousseauian Normans of the American South.  In Aristotle’s view is Sowell’s constrained vision, Haidt’s all-foundation moral matrix, and the Burkean Anglo-Saxons of the American North.

Despite their differences, Plato and Aristotle agreed on many things. They both stressed the importance of reason as our guide for understanding and shaping the world. Both believed that our physical world is shaped by certain eternal forms that are more real than matter. The difference was that Plato’s forms existed outside matter, whereas Aristotle’s forms were unrealiziable without out it. (p. 61)

The twentieth century’s greatest ideological conflicts do mark the violent unfolding of a Platonist versus Aristotelian vie of what it means to be free and how reason and knowledge ultimately fit into our lives (p.539-540)

I further suggest that today’s partisan rancor is merely the latest battle in that same war, but because of movement of people within the US since the Civil War and the self segregation of the Big Sort, the geographic battle lines are no longer North vs South, but rather are shown by the research of Charles Murray, summarized in his Coming Apart, and very briefly in my blog post Why Hillary Lost and the Media Failed to See it Coming, in Two Maps, copied here for convenience:

Q: “If you want your child to grow up clueless about mainstream white (1) America, what are the ZIP codes that have the best track record?” (2)

A: “The country’s most prosperous, highly educated” ZIPs (“Super ZIPs”) shown in this map based on U.S. Census data by The Washington Post. (3)

The areas that voted for Hillary, and in which most media is owned and operated, are shown in blue in this map.(4)

(1) From PBS News Hour, What Does Your Bubble Quiz Score Say About You?

(2) Did You Grow Up In A Bubble?  These Zip Codes Suggest You Did, PBS News Hour

(4) Maps of 2016 Election Results, Mark Newman, Department of Physics and Center for the Study of Complex Systems, University of Michigan. Updated: November 10, 2016