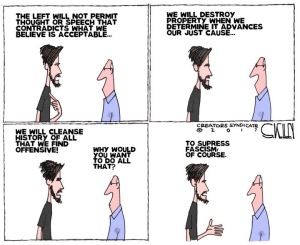 In The Coddling of the American Mind Haidt and Lukianoff describe how the cognitively distorted thinking of emotional reasoning is harming the mental health of university students..

I suggest that the problem goes far beyond the campus, and that what’s happening these days on the left in Western culture at large is NOT merely a free-speech crisis, nor is it crisis of a lack of viewpoint diversity, but rather a mental health crisis of massive proportions.

Did you actually watch the press conference in Trump Tower the other day?  Trump was awkward, clumsy, and inelegant in his choice of words. But his message was absolutely right.  Bigotry is bigotry. Period.  There’s no excuse for violence, no matter matter the rationale behind it. Others agree, including the left-leaning USA Today and Los Angeles Times.

But the press were having none of it. They were one hundred percent deaf to his message. They were more concerned with trapping him into some kind of “gotcha” moment with which he can be taken down than with doing their professional duty of hearing, listening, understanding, and truthfully relaying what actually happened. They were literally incapable of rational thought, so blinded are they by left-wing groupthink. They were like a school of piranha in a feeding frenzy. It was disgusting. They should be ashamed, embarrassed, humiliated by their thinking and by their actions. They were not practicing journalism.  They were practicing character assassination.  They are a disgrace, an insult, to their profession.

Nazism is horrible. Do not for one instant construe that this essay, or anything I ever say anywhere at any time, in any way defends, supports, or apologizes for white (or any race) supremacy.  I vehemently reject, disavow, and disassociate with any such ideology.

The fact that I even have to say that speaks volumes about how out of its mind the left has become.  I’m embarrassed and ashamed for my country and her ideals.

In social psychology there’s a concept called “sacred values.”  Sacred values are virtues that are believed by the in-group who reveres them to be above reproach, unquestionable.  Any person who even hints at questioning or, Heaven forbid, violating, a sacred value risks being outcast, or worse, by the group.

I suggest there’s a parallel concept of the sacred sin; a belief so heinous that anyone and everyone who subscribes to it is similarly treated.  The in-group tends to see “others” outside of it as sacred sinners; sub-humans who can never and will never be admitted to the group.

Sacred sinners are such horrible people that they deserve to be physically prevented from expressing their ideas, shouted down when they do express them, and harmed or even killed for holding them. 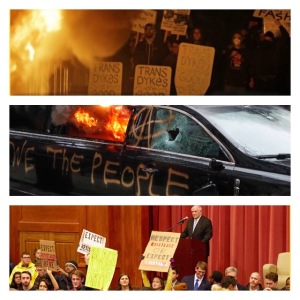 To the insane left it’s not only acceptable, but admirable, virtuous, to “Punch a Nazi.” Even shooting up a bunch of innocent people playing baseball is met with the cultural equivalent of a shrug. Oh sure, people feign shock and horror, but they “dost protest too much.”  The overall tone is difficult to miss; “They had it coming.”

The left has become so completely blinded by its self righteous indignation and epistemic and moral certainty that it literally cannot think straight.  It’s in the midst of a culture-wide mental health crisis of exactly that described in Coddling. It’s insane.

Eight years of Obama’s normalizing and institutionalizing the notion that whites and flyover country are hate-filled “clingers” and “deplorables” on top of nearly a century of the exact same message by Democratic leadership from Woodrow Wilson’s rejection of the the Constitution to Hillary’s “Deploables,” and the Democratic Party is finally having the desired effect.  The left in education, the media, and entertainment (but I repeat myself) have actually become the unthinking zombies it portrays whites and the right to be.

Goebbels would be proud.