The Psychological Components of Ideology and Morality

These two pen and ink sketches, described below, by Las Vegas artist Michael Godard represent the two psychological traits that are markedly different in liberalism and conservatism: Moral Foundations and Cognitive Style.. 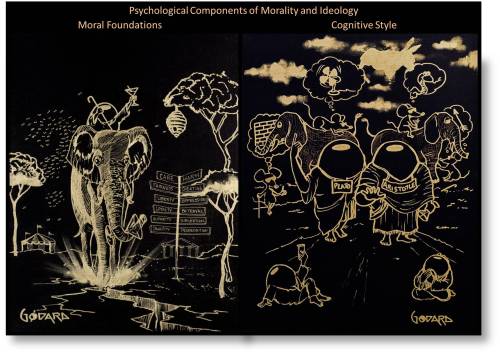 The sketch on the left is a visualization of The Righteous Mind: Why Good People Are Divided by Politics and Religion by Jonathan Haidt.

The sketch on the right is a visualization of The Cave and the Light: Plato Versus Aristotle, and the Struggle for the Soul of Western Civilization by Arthur Herman.

The olive character and the martini glass are Godard’s signature figures. They represent his home town of Las Vegas and the ideas of happiness, celebration, and fun. Their presence in the drawing adds a touch of whimsy, and reminds us to stop and smell the roses, or sip the martini. In the context of this particular image the olive’s partying style represents overconfidence on the part of consciousness and reason that they are in charge, and their obliviousness to the fact that it’s really the elephant of subconscious intuition who mostly determines our path in life.

Notice that the tall tree on the right is in the shape of a brain.

The two trees on the right together represent “The First Division: Mind vs. Body,” in chapter one of The Happiness Hypothesis: Finding Modern Truth in Ancient Wisdom

The bees and the hive represent the ethics of autonomy and community, and the question: which is more important?

The circus tent and the building with columns represent “your body may be a temple but mine is an amusement park,” and more generally Thomas Sowell’s concept of constrained and unconstrained visions from his book A Conflict of Visions: Ideological Origins of Political Struggles

. Notice the word “Temple” spelled out in dots near the base of the bottom right tree.

Degradation is spelled wrong intentionally to represent that “people are inherently imperfect.”

Each of the elephant’s ears have the number nine in them, representing the “99 per cent of mental processes – the ones that occur outside of awareness but that actually govern most of our behavior.”

The earthquake-like crack in the ground represents the political divide and Charles Murray’s Coming Apart: The State of White America, 1960-2010

. It also represents the slash in the dust jacket of the hardcover edition of The Righteous Mind: Why Good People Are Divided by Politics and Religion 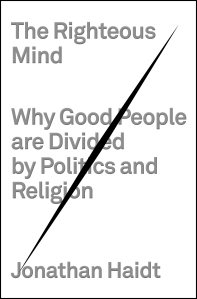 Godard’s representation of the divide, and the relationship between it and the rider/elephant, is brilliant, and the conceptual heart of the piece. The mass and momentum of the elephant suggest that the divide is practically inevitable. The “ride-em cowboy” demeanor of the rider suggests the arrogance of reason, and the notion that, far from being a rational counselor steering the elephant along the path toward moral truth as it believes itself to be, the rider is more like an enabler to a destructive personality. The rider, thinking reason is on its side, believes it is helping to cure or at least alleviate the divide, when in fact it often exacerbates it

The sketch on the right represents the two main cognitive styles seen throughout human history, represented in Raphael’s painting The School of Athens, and described by Arthur Herman in his book The Cave and the Light: Plato Versus Aristotle, and the Struggle for the Soul of Western Civilization. Raphael’s painting appears on the cover of the book and at the 24:22 mark of this lecture.

Plato’s abstract ideal “Light” is a metaphor for the Telos of social justice.

Aristotle’s empiricism is a metaphor for the Telos of truth.

The entire lecture can be seen as an interpretation or statement of my thesis of cognitive style.

Plato’s WEIRD “scientific” reasoning and its faith in Oakeshott’s “technical” knowledge is on the left. The character in the lower left is a scientist examining life as a world full of objects, represented by a test tube.

Aristotle’s holistic analects-style reasoning and its faith in Oakeshott’s technical AND practical knowledge is on the right. The character in the lower right is Confucius pondering life as a world full of relationships.

The two elephants in the background and the blind mice around them represent the fable of the blind men and the elephant, and the many different people who have described these two cognitive styles.

describes three principles of moral psychology.  I happen to think there’s a fourth that’s missed by the books author.  It is this: Cognitive style comes first, intuitions follow. (and then reason is the slave of both)

The partisan divide is primarily between the cognitive styles, and only secondarily between the “visions,” or the principles and values, of liberalism and conservatism. It’s a mistake to think of it the other way around.

For the record, I also think there’s a fifth principle of moral psychology: Moral foundations (intuitions) reveal and enlighten. This principle explains Haidt’s findings re: the relative understanding of human nature, and of each other, on the left and the right. Without it, Moral Foundations Theory and The Righteous Mind: Why Good People Are Divided by Politics and Religion

do NOT explain those findings.

The education system does Western Culture a DIS-service by sacralizing half of the evolution-given gifts of social perception and awareness, and demonizing the other half; it prevents, rather than promotes, knowledge; understanding; and the Telos of truth.

Any school at any level, from kindergarten onward, that chooses the telos of truth must reinforce ALL the moral foundations and intuitions, and the lessons and uses, good and bad, that follow from them. .