How Humans Flourish and Wither

Humans are like plants, not buildings.  They tend to flourish when the conditions in which they live ALLOW them to, as the old Army slogan used to say, “Be all you can be.”  They tend to wither when conditions are engineered to MAKE them into an idealized image of what some of them think they should be.

Humans have been around long enough to have figured out a few things.  History is a veritable “How To” manual for flourishing AND withering.

One of the things we’ve figured out is the set of conditions in which we are most likely to flourish. Here they are:

These are the conditions in the garden of humanity which ALLOW this to happen:

We’ve ALSO figured out the set of conditions that is most likely to create oppression, suppression, and misery.  Here they are: 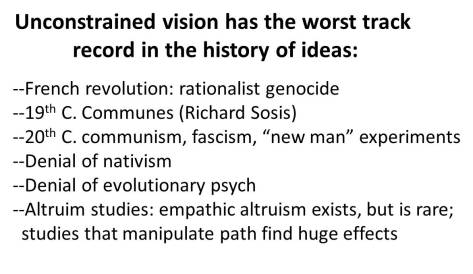 When Compassion Leads to Sacrilege, 1:03:48 mark of this lecture, full transcript here)