The Emperor Has No Clothes! The Small Minded Bigotry of “Care” is a Cognitive Disorder that is Tearing Us Apart

Posted by The Independent Whig ⋅ September 2, 2016 ⋅ Leave a comment

The mentality behind the above quote is Exhibit A in the pantheon of devastatingly harmful social consequence that follow from the combined effects of the cognitively distorted thinking described in The Coddling of the American Mind along with the new religion of anti-racism.

That mentality is a direct and nearly inevitable result of the toxic mix of the one-foundation moral matrix and the WEIRD cognitive style in a death spiral of self-fulfilling prophesies of group think in the nearly ideologically pure environs of academia, journalism (sic), and entertainment that enjoy virtually monopolistic control of Western culture.  The influence those industries have on the culture is sucking the life out of it like a parasite.

The psychology behind the religion of anti-racism is little different from the psychology racism itself.  It is an irrational emotion of disgust and revulsion toward “others.”  It is moral, ideological, intellectual, superiority of the worst kind.

It is pure unadulterated, unfounded hate in all its sick twisted glory.

It is not possible for a mature, grounded, emotionally, psychologically, mature adult to honestly think and believe as illustrated in that quote.

of the Unconstrained Vision is a mental illness, a social disease, that has infected Western culture ans is rotting it from within like cancer. The left follow its dictates with zombie-like single mindedness, calling out “others” as if in a scene from Invasion of the Body Snatchers.

Does that remind you of anyone? Here’s a hint: 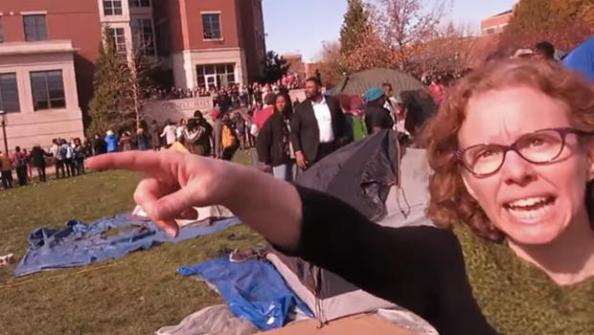 But wait.  It gets worse.

In an ironic Catch-22* twist of fate the “Can we all get along?”, who are you to judge?, John Lennon “Imagine,” feel-good relativism of the Unconstrained Vision has insinuated itself like a parasitic virus into Western thought so thoroughly that vast numbers of us are as unaware of the virus as fish are of water:

… The immediate point of the fish story is that the most obvious, ubiquitous, important realities are often the ones that are the hardest to see and talk about. Stated as an English sentence, of course, this is just a banal platitude – but the fact is that, in the day-to-day trenches of adult existence, banal platitudes can have life-or-death importance.  – David Foster Wallace

We take it as a matter of unquestioned religious faith that every ideology is equally right and equally wrong, just in different ways or on different topics. And “getting along” is therefore seen as a simple matter of “compromise” and “meeting in the middle” in a “no labels” sort of way. The idea that one might be more right than wrong or more wrong than right is simply not part of our cognitive universe.

It’s a lie, and A Grave Error of Intellect and Imagination.

But since culture and the psyche make each other up the lie is so deeply embedded in our perception of and thinking about the social world that we’re as aware of it as the fish are of the water, which is not at all.

It prevents us from seeing the reality that’s right in front of our eyes:

Proper treatment of a disease requires proper diagnosis of its cause. But as things stand right now the disease itself, and its misguided sense of propriety or politeness or political correctness, and the fear of “offending” that come with it, prevent the clarity of perception and thought required to diagnose it.

Enough is enough.  We have little chance of curing the disease unless and until we find a way to lift the veil from our eyes it creates, and see it for what it really is.

The “emperor” of the Unconstrained Vision of the one-foundation moral matrix, and the WEIRD cognitive style has no clothes.

* Catch-22: A problem for which the solution is prevented by the cicrumstances that created the problem in the first place.