According to this article, apparently Chris Matthews believes that Republicans: “Never Say Their Problem With Obama Is That He Is Black.”

As Jonathan Haidt describes in The Righteous Mind: Why Good People Are Divided by Politics and Religion

, moral dumbfounding is when a person is “rendered speechless by their inability to explain verbally what they knew intuitively.” (page 29, paperback version)

Moral foundations are evolved psychological mechanisms of social perception.  It’s as if they’re color receptors of the moral eye.  The more of them we have, the more of the social world around us we perceive. They are also the cognitive tools of intuitive understanding for the elephant, and of rational reason for the rider.

When half of the foundations are external to one’s moral universe one lacks the tools to fathom what the rest of the world is thinking and doing, and one is left with no available option but to conclude as Chris Matthews does that the rest of the world must suffer from some sort of psychological or moral or emotional dysfunction.  It’s as Haidt says, describing the findings of a study which showed that conservatives understand liberals better than liberals understand conservatives:  “If you have a moral matrix built primarily on care, what else could you think?” (The Righteous Mind, page 335, paperback version)

Village Voice theater critic Micheal Feingold was also dumbfounded about the right when he wrote:

Republicans don’t believe in the imagination, partly because so few of them have one, but mostly because it gets in the way of their chosen work, which is to destroy the human race and the planet. Human beings, who have imaginations, can see a recipe for disaster in the making; Republicans, whose goal in life is to profit from disaster and who don’t give a hoot about human beings, either can’t or won’t. Which is why I personally think they should be exterminated before they cause any more harm.  (The Righteous Mind, page 335, paperback version)

Chris Matthews and Michael Feingold are morally dumbfounded because they are not playing with a full deck, as it were, of moral foundations.

Moral dumbfounding of the left about the right is the elephant in the room in polite conversation about the political divide.  Only when we talk about it openly and address it directly will civil politics be possible.  That the sort of thinking exhibited by Matthews and Feingold is apparently accepted in some circles as status quo “thinking” and de rigueur “analysis” of the right  in our supposedly enlightened world is astounding.

The moral equivalence of Haidt’s Yin/Yang metaphor of the relationship between liberalism and conservatism, and of his Asteroids Club – the motto of which is “I’ll help you deflect your asteroid if you’ll help me deflect mine” –  and of his analogy of moral foundations as  taste buds with its implication that moralities are little more than personal preferences between otherwise like things – like a preference for one cuisine over another  –  all ignore the elephant in the room, and further, play straight into the wheelhouse of the moral relativism of the unconstrained vision.

I’m convinced that the best cure for the political divide is to talk to the elephant about moral foundations starting in kindergarten, and continuing throughout all levels of education, as I’ve outlined in this post.

I was thrilled recently to see The Righteous Mind

in the Rhodes college bookstore as required reading for one of the classes there (see photo below). Would that it were on the shelves of every college.   Despite my criticisms of Haidt’s metaphors, the actual content of the research and findings detailed in his book is a huge step in the right direction.  Maybe, in the same way that the first ten and a half chapters of The Righteous Mind prime the reader to be open to Haidt’s definition of morality, his body of work will prime people to be open to discuss the elephant in the room. 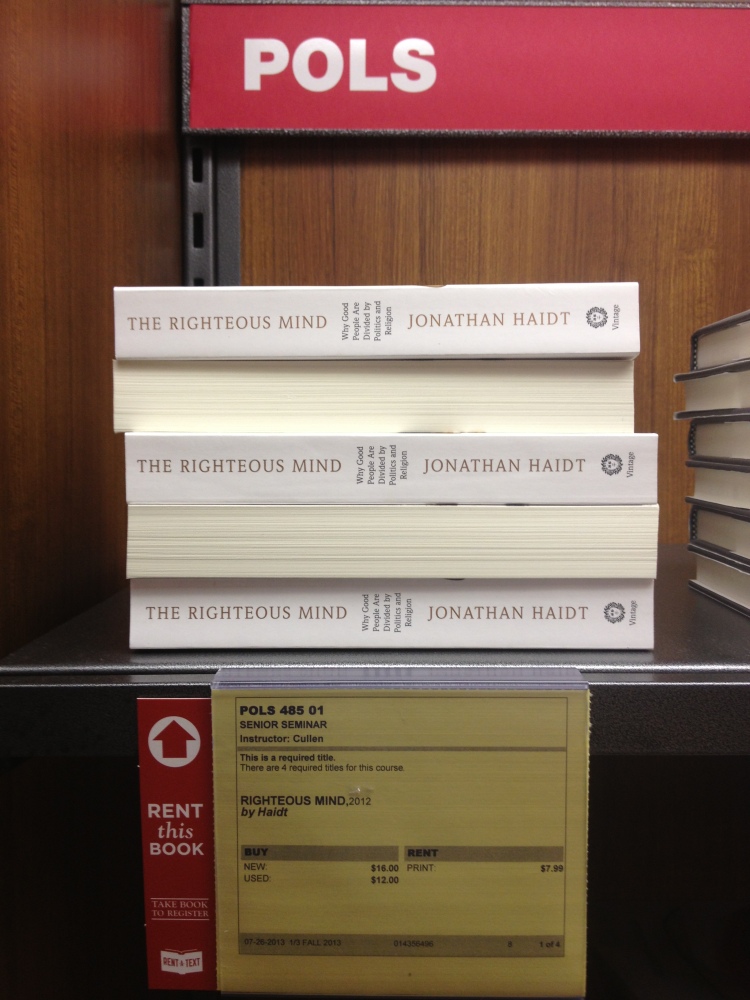